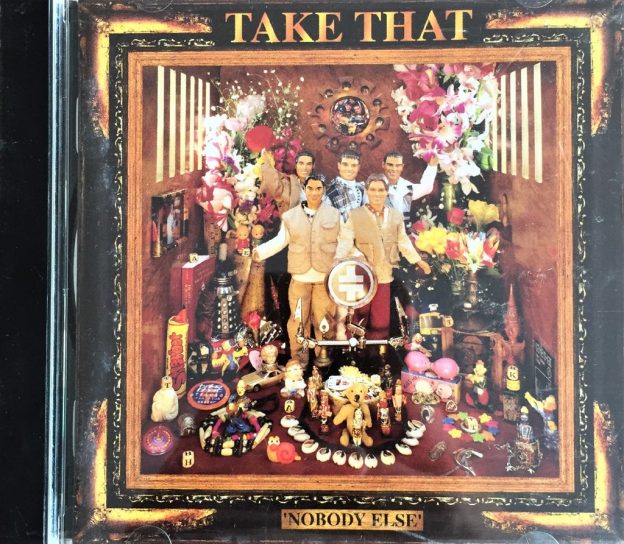 Nobody Else is the third studio album released by British boyband Take That. It was released in the UK and Europe on 8 May 1995 and on 15 August 1995 in North America. The album was released on 8 May 1995. Nobody Else and would become the band’s last studio album to be recorded before they disbanded in 1996. In the UK the album debuted at number 1 selling 163,399 in its first week. Nobody Else also became the last album to feature Robbie Williams until his return to the band in 2010. The album spawned three UK number one singles: “Sure”, “Back for Good”, which went to number 1 in over 31 countries worldwide, and “Never Forget”. “Every Guy” was also issued as a promotional single, and “Sunday to Saturday” was issued as a single in Japan instead of “Never Forget”. The single release of Never Forget in July 1995 marked the departure of Robbie Williams. The album reached number one in the UK, German, Dutch, Irish, Finnish, Belgian, Austrian, Italian and Swiss charts, and was also released in America by Arista Records on 15 August 1995, albeit with a different tracklisting, containing many of the group’s previous singles. In support of the album, the band went on the Nobody Else Tour, playing 31 dates across countries such as the UK, Australia, Thailand, Singapore and Japan. Footage from the concert was released on video, entitled Nobody Else: The Movie. The album has been certified 2x Platinum in the UK. “All That Matters to Me” appears exclusively on the Japanese edition of the album.