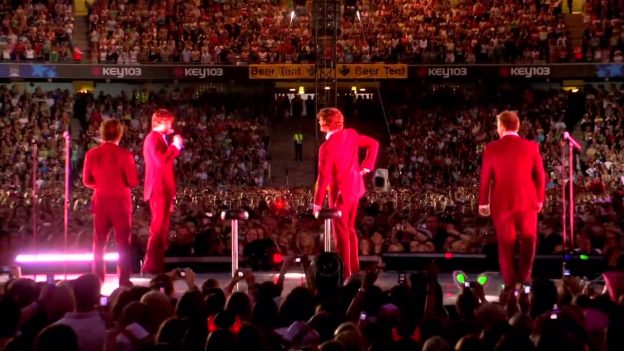 The Ultimate Tour was the first time that Take That had performed together since they split in 1996. The show featured all the original members of the group, except Robbie Williams who quit the group in 1995. At a press conference in London on November 25, 2005 the group front man Gary Barlow announced: “Thanks for giving us the last 10 years off but unfortunately the rumours are true. Take That are going back on tour.” The news came after renewed interest in the group after a televised documentary proved to be a ratings success and their album Never Forget: The Ultimate Collection peaked at #2 in the UK Albums Chart. The tour was originally scheduled to be an 11 date arena tour but after they sold out within 30 minutes of going on sale, more dates were immediately added as promoters doubled the number of shows. The group sold 275,000 tickets in the space of under 3 hours, ironically making it the second fastest tour of 2005 behind former member Robbie Williams’ solo tour. Such was the level of interest in the tour, promoters were forced to add further dates to the tour, this time in Stadium venues. Dates at the new Wembley Stadium, City of Manchester Stadium and the Millennium Stadium in Cardiff were all announced. When Wembley Stadium sold out in just 30 minutes, further more dates at Wembley and Manchester were announced. In March 2006, the dates at Wembley Stadium were re-scheduled to the Milton Keynes Bowl due to the delay in the construction of Wembley Stadium.