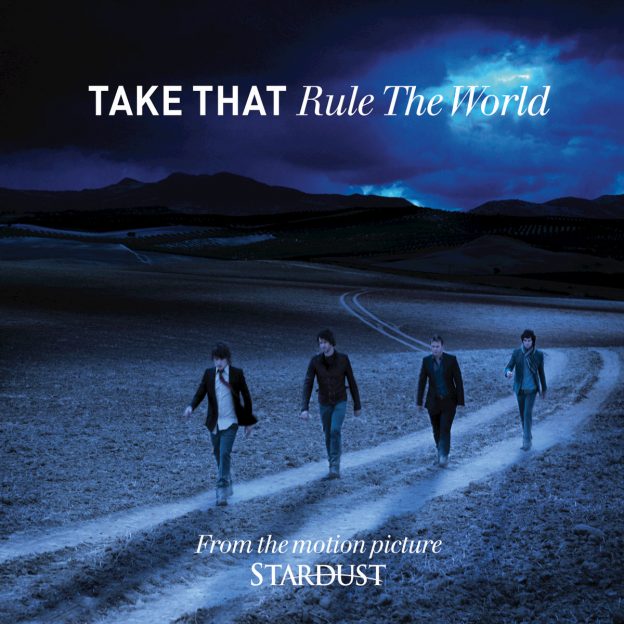 “Rule the World” is the fifth single from Take That’s fourth studio album Beautiful World. It was released in the UK on 21 October 2007 and as a CD single the following day. Take That performed the song at the London 2012 Olympic Games Closing Ceremony whilst the Olympic Flame was extinguished. “Rule the World” is the first song written by Take That specifically for a film. Matthew Vaughn, the director of Stardust, contacted Take That in the hope of getting them to write a song for the film. After seeing the film the band members agreed to write and perform a song. The band wrote the chorus of the song while they were in Spain. They played the song for Matthew Vaughn who included it in the end credits of the film. Gary Barlow performs main lead vocals with a partial lead from Howard Donald. The song is not included on the soundtrack for Stardust, nor on the original release of the album Beautiful World. It was released internationally exclusively as a single in October 2007, and was premiered live by the band at the inaugural National Movie Awards on 28 September 2007 to rave reviews and critical acclaim. It ended 2007 as the year’s 5th biggest-selling single in the UK, despite being released just two months from the end of the year.[2] The song was also the 44th best selling single in the UK of 2008, the following year, and the 16th best selling single in Ireland in 2007. The full length version appears exclusively on the Tour Souvenir Edition of the album Beautiful World. The song was the finale to the The Circus Tour in 2009. This song was also performed on 19 November 2009 for Children in Need on “Children In Need Rocks The Royal Albert Hall”, where Gary Barlow dedicated it to his father, who had died 5 weeks earlier. In October 2007, the song entered the UK Singles Chart at #46 and peaked at #2, being held off the #1 spot by Leona Lewis’ “Bleeding Love”. The song became the 5th biggest selling single of 2007 and remained in the Top 100 until the 12 April 2009, 1 year, 5 months and 21 days after the single’s release. On 21 September 2008, the song managed to climb back up to #34 on the UK Singles Chart following a performance by contestants on BBC One’s Last Choir Standing and on 30 November 2008 it managed to climb up the chart once again to #27 following its appearance on The X Factor, sung by Rachel Hylton. The song spent twelve weeks inside the UK top ten, the longest of any Take That song. It re-entered the chart again in November 2009 following another X Factor performance, this time by Stacey Solomon, and again in November 2010, and has spent 74 weeks on the official UK Top 75 chart, making it the 5th longest runner of all time, and 97 weeks on the Top 100. It was the 30th biggest-selling single of the 2000s in the UK.